A Complete Guide To Victoria Park. A.K.A. + Things To Do

Great parks are a one-stop activity hub. They are not only suitable for a walk or run but are also a spot to relax, unwind and visit any attractions available.

A review of one of the most popular parks in London might be what you need to help you choose a location for your next outing.

Victoria Park is a public park in East London, one of the Tower Hamlet parks. It is not just any park as it boasts 218 acres of land. A feat that makes it the most extensive green space in the city.

There might be many “Victoria Parks” around the world, but there is only one Victoria Park in east London. 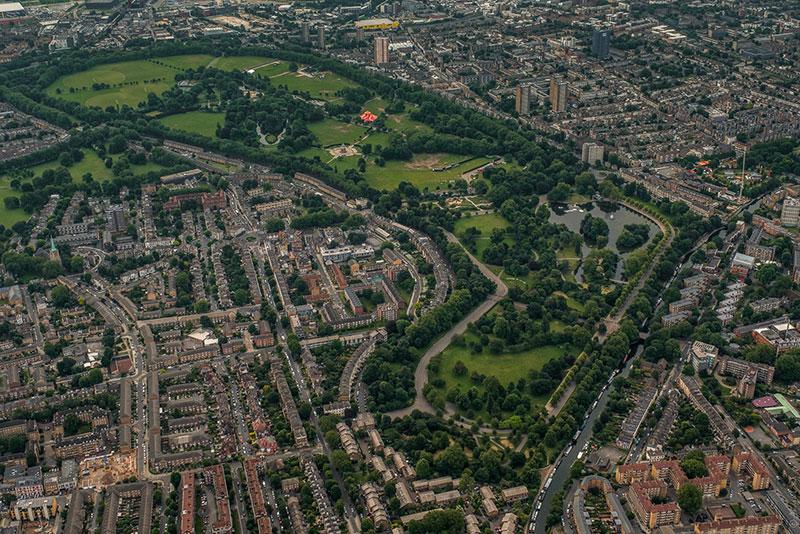 A view of Victoria Park from above.

Victoria Park has grown in popularity over the years, even winning multiple awards and titles. Some notable awards have been Green Flag awards and a Green Heritage Site title.

The park’s beautiful scenery attracts a whopping 9 million visitors a year! The activities available to visitors have also contributed to its popularity.

Here is a quick history lesson before we move on to the park’s main attractions.

Victoria Park became the first park in London created for the people. Hence the name “People’s Park”; I know you wondered about that already.

The plan for the park was suggested in a bid to improve the health of citizens in the neighborhood. The parliament decided that open space would be a good break from overcrowding in the city. While also helping to curb the spread of diseases.

Victoria Park was built in 1842, officially opened in 1845, and was used as a meeting place for union members. It also hosted several political rallies.

Today, Victoria Park hosts large musical concerts, festivals, and significant events. I guess being at the center of East London has its perks too.

How to get to Victoria Park

There are several easy ways to get to the park, but I would advise sticking to the two central line underground stations (Bethnal green and Mile-end) if you’re not driving.

If you’re not interested in exploring blindly, here’s a map to get you started. 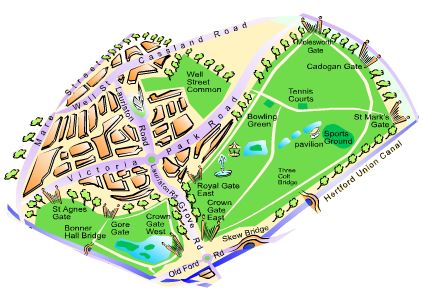 Alternatively, you can ditch the map and wander around the park. If it is your first time, you are in for many surprises.

The park is open from 7 am till quite late. That is plenty of time for you and your loved ones to explore and engage in fun activities.

I know what you are thinking; “Well, what are these fun activities you’re talking about?”. Let us get into the details!

Oops! I think I neglected to mention earlier that the Park is divided into two areas (east and west) by Grove road.

If you are a better map reader than I am, you must have figured that out from the map above already.

The smaller western area is home to Victoria park lake. It’s a pretty shallow lake and safe for boating expeditions.

Little pleasure boats are available for hire in the summer months. A group boating race would be a bang! 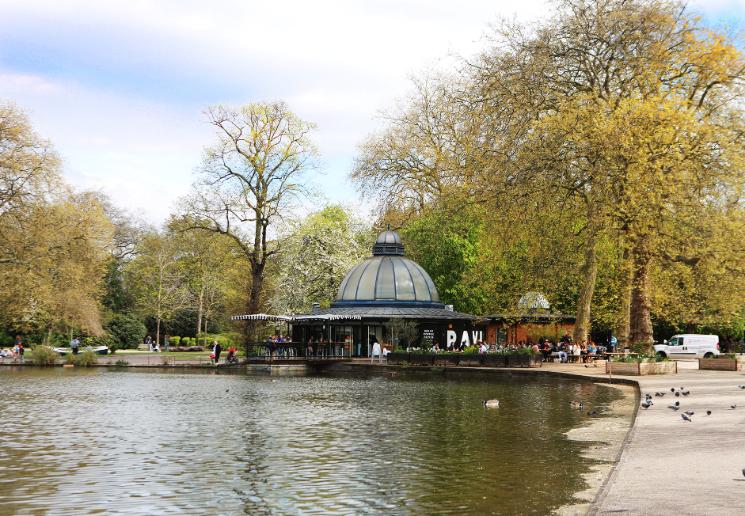 A visit to the fun splash pool in hot summer can make your day! Especially if you brought your little cousins along to the park. You get to relax and have fun at the same time.

The Victoria Park Splash pool is in the eastern area. It’s usually open from late May to early September. 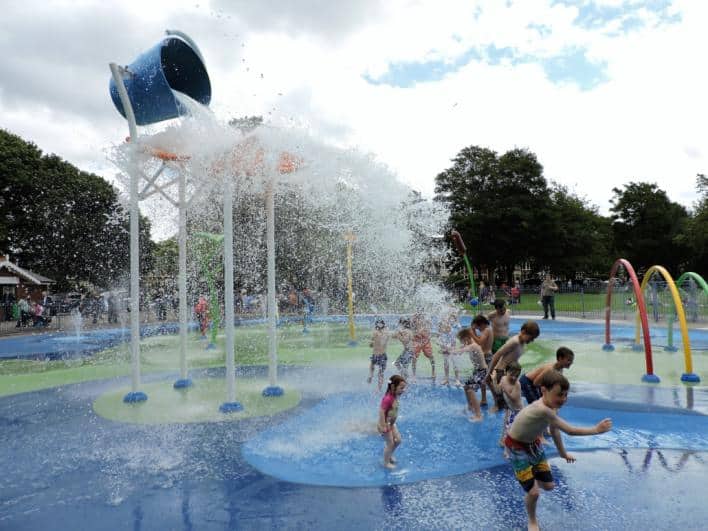 Victoria Park is a sports hub!

The park’s well-paved path is suitable for cycling, jogging, and strolling.

The Victoria Park Harriers and Tower Hamlets athletics club go as far back as 1926. They hold meetings on Tuesdays and Thursdays at 7 pm. You might want to check them out if you stay close to the area. You are likely to have worked up an appetite after hitting all the fun spots at the park.

Thankfully, you don’t have to stay hungry at Victoria Park. The pavilion cafe is set up just for that.

The Pavilion cafe can be a bit pricey and has a cashless policy. Make sure you go prepared.

The Victoria Drinking Fountain was designed and named in honor of philanthropist Angela Burdett Coutts.

It was built in 1862 and is one of the few remaining original buildings from when the park first opened. 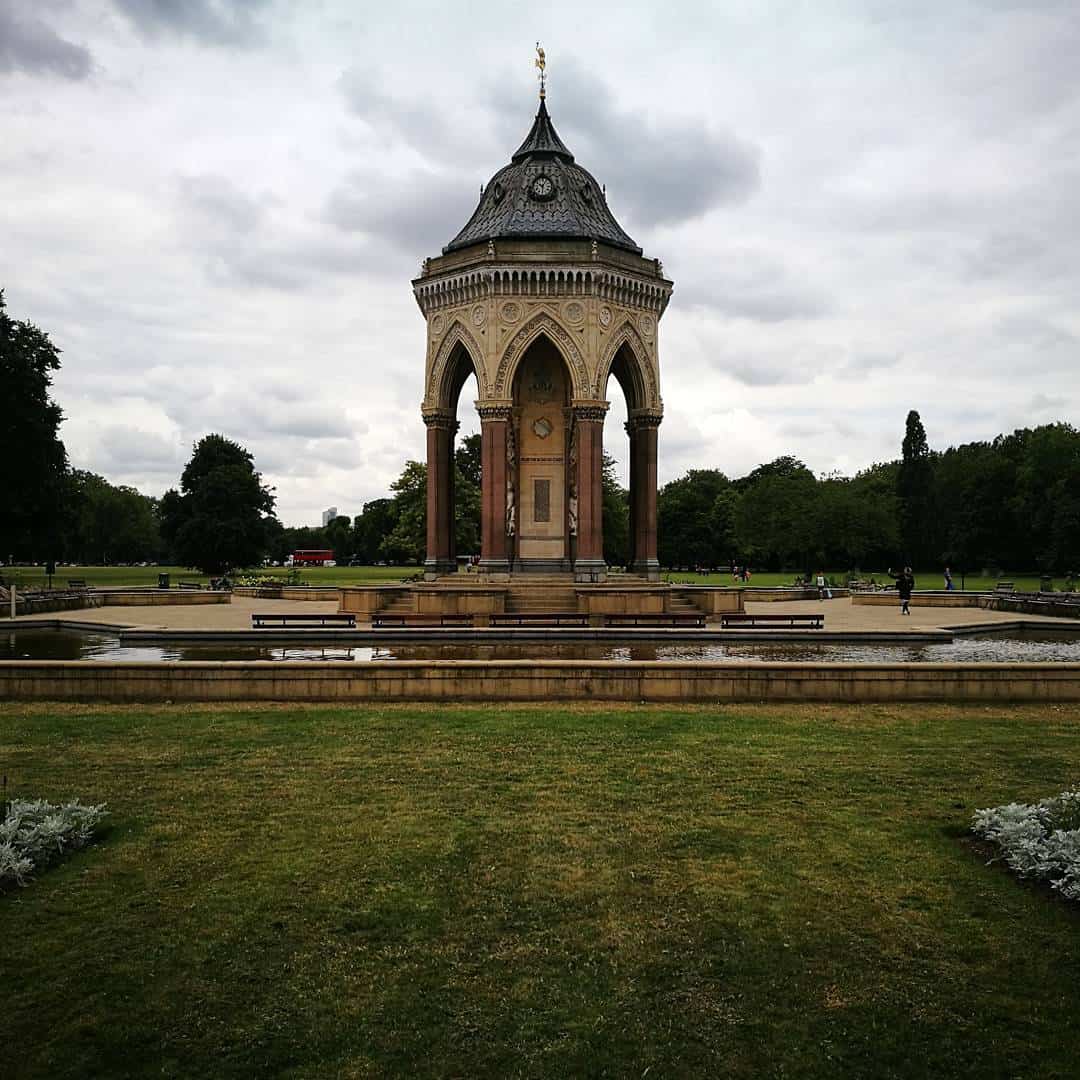 You can find the fountain towards the center of the east side. The drinking fountain serves as a meeting point for local groups. Another great spot for pictures! 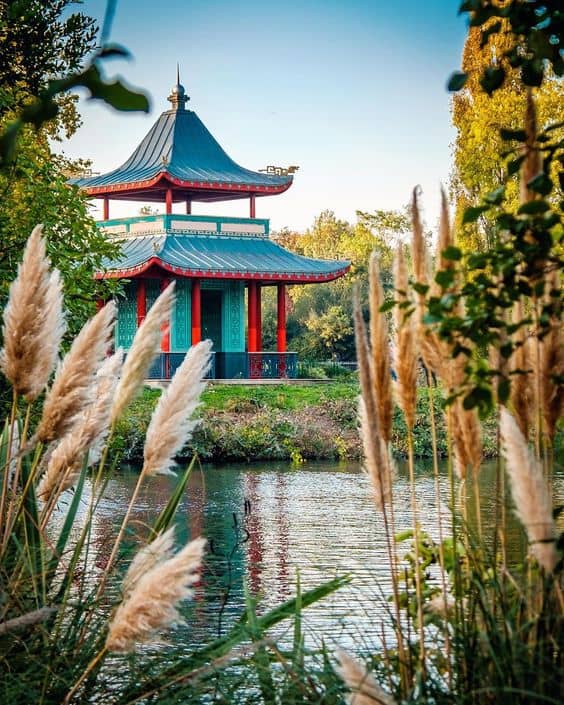 Visiting Victoria Park might be incomplete if you don’t take pictures at the Chinese Pagoda. It’s not a sight you get to behold every day.

Did you know that The Chinese Pagoda was moved from Hyde Park to Victoria Park? That happened after the famous Chinese Exhibition in the 1940s.

It was recently renovated and is now a good spot for selfies and family photos. 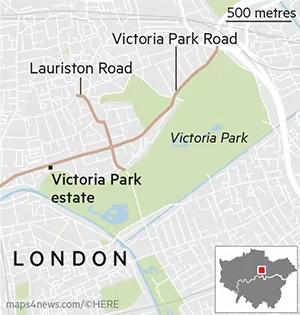 The Victoria Park village is located north of the park, with bordered by Lauriston Road and Victoria Park Road (check out the map above). 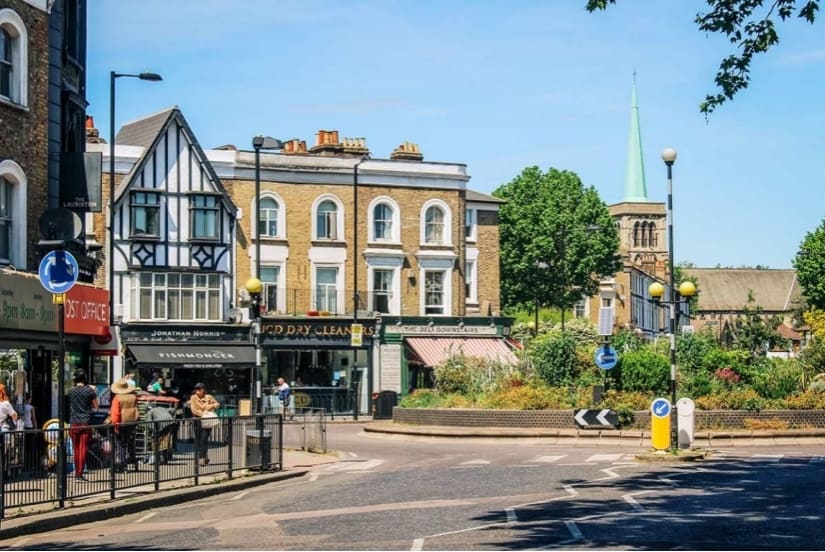 Exploring this village with friends on a sunny day is a great idea.

The Victoria Park Village features beautiful Victorian and Georgian buildings and several commercial activities. The village benefits from the steady stream of visitors from Victoria Park, which boosts the village’s economy.

Enjoy different activities ranging from decorating ready-made pottery to tasting and sampling wines. You might even want to consider Victoria Park village if you plan to move to the area.

The park’s market opens weekly on Sundays from 10 am till 4 pm. You can find the market on the night walk, a street between Bonner Gate and Gore Gate (you might want to look at the map again).

You have enough time to try out street food from the different offerings in the market stalls. A splendid Sunday outing if you ask me. 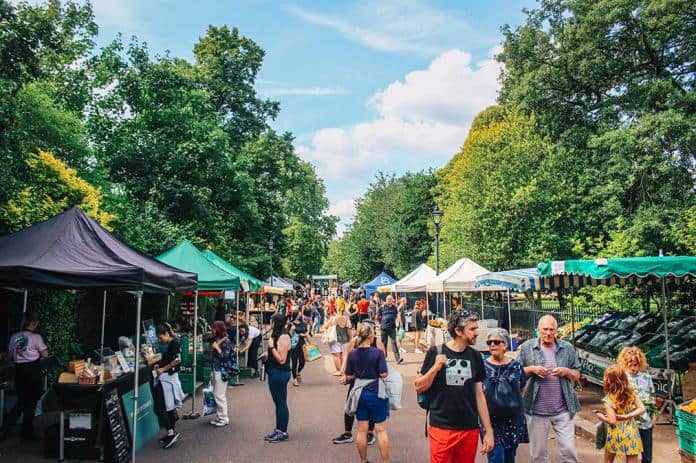 Victoria Park is famously known for hosting popular events every year. The park used to host the Lovebox festival now replaced with the All points East festival. 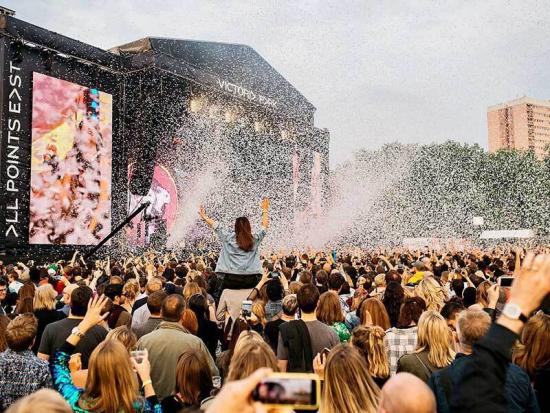 Here’s another event hosted at the park – the Victoria Park Race. The race is usually held in November. The race comprises

There are lots of other events to attend asides from the annual ones. You can stay up-to-date on the events at the park by checking their website.

The annual fireworks display in Victoria Park is usually a sight to behold. Every year, a theme is selected for the event, and the cost is covered by Tower Hamlets’ Art, Parks, and Events team.

The show lasts about 25 minutes and is frequently accompanied by current music. Access to a free fireworks display, in my opinion, is a sure way to lift one’s spirits and live in the moment.

Victoria Park appears to be a complex character with many facets. It caters to everyone, including those who enjoy strong drinks.

You can enjoy some drinks at the Royal Inn and the People’s Park Tavern. The pubs are both located on the park’s perimeter.

The Royal Inn On The Park is located near the Victoria Park Village entrance. Its beer garden has a direct view of the park. 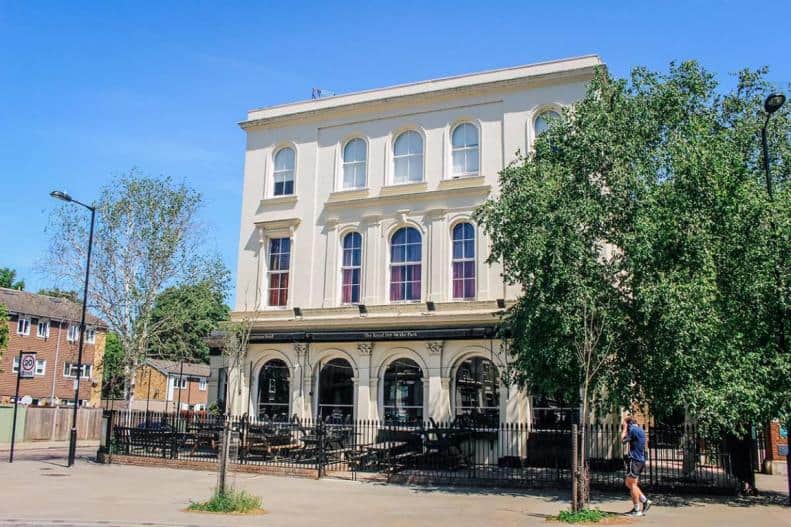 The Royal Inn on the Park.

The People’s park tavern has an onsite microbrewery – the Brew Lab from Laine brewery.

Another fun attraction at the park is the toilet.

Just kidding! I could hear the wheels of your brain turning already.

I know toilets are not meant for fun (except you’re reading a new edition of your favorite magazine), but they can be life savers.

If you’re spending the whole day at the park, you’ll need to know where to find the toilets.

So pay attention as I walk you through this integral part of Victoria Park.

You can find toilets on the west side of the park, right next to the Pavilion Cafe, and another set of toilets on the east side near the tennis courts.

I guess that’s enough toilets for one park.

Whatever activity you choose, you will most likely have a great time basking in the beauty of nature. 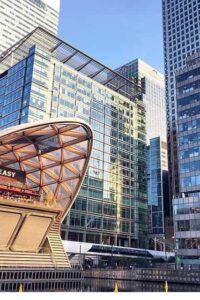 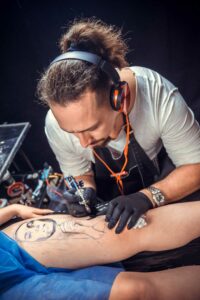 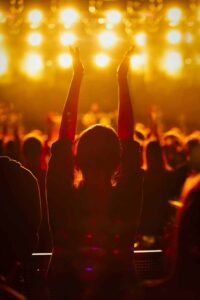