Frozen yoghurt, just like ice cream, is a frozen dessert that can be eaten either dairy or non-diary, which is now mainly due to the many advances in replacement food options readily available.

With some tubs of frozen yoghurt containing less than two hundred calories, it’s safe to say this sweet treat is a much better gut-friendly option. 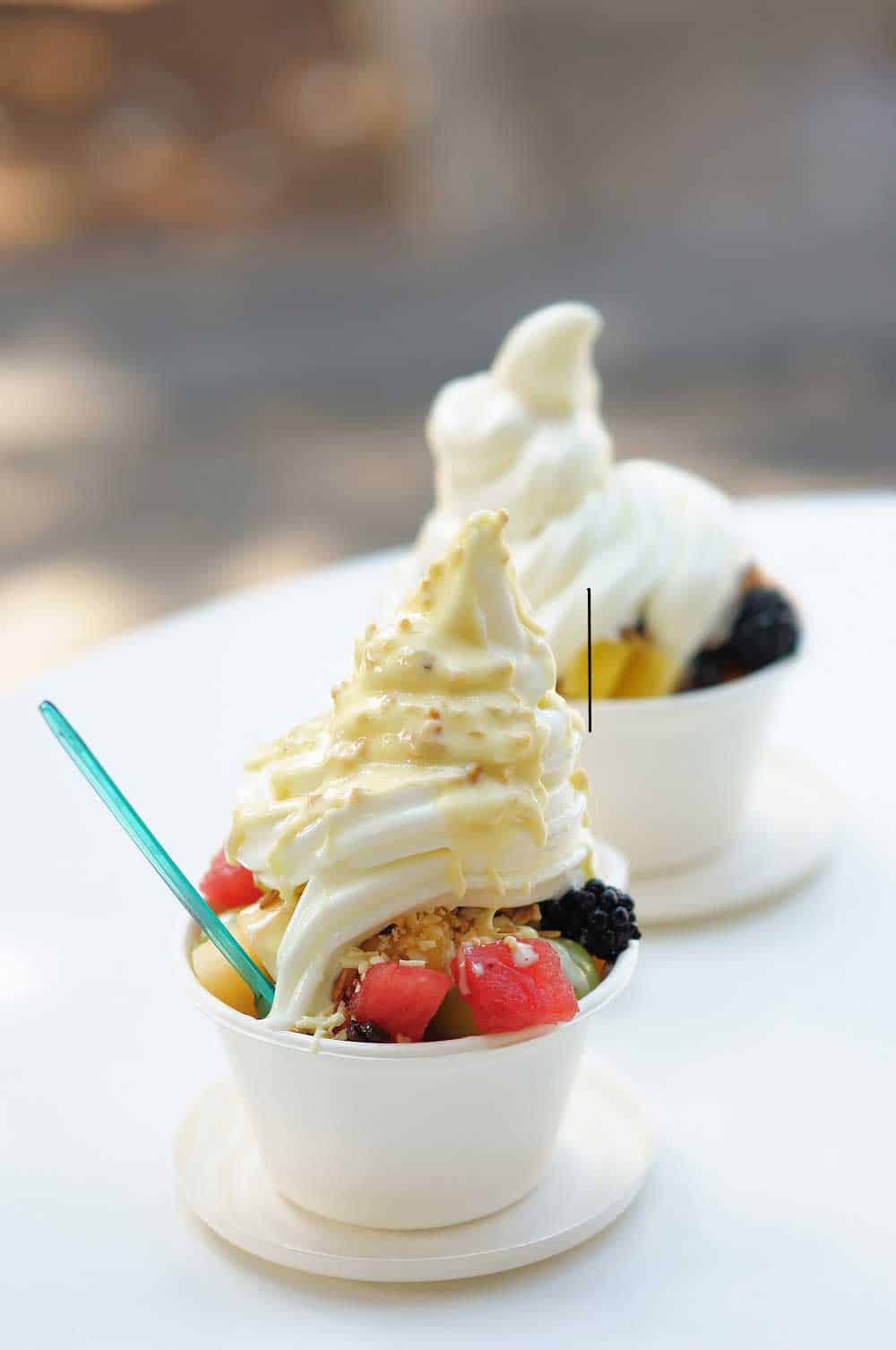 The popularity of frozen yoghurt has been rapidly increasing, which means London has had numerous different frozen yoghurt shops popping up across the city center and its outskirts.

Here we look at the top eight frozen yoghurt spots across the capital city:

1. Snog at Southbank and other locations 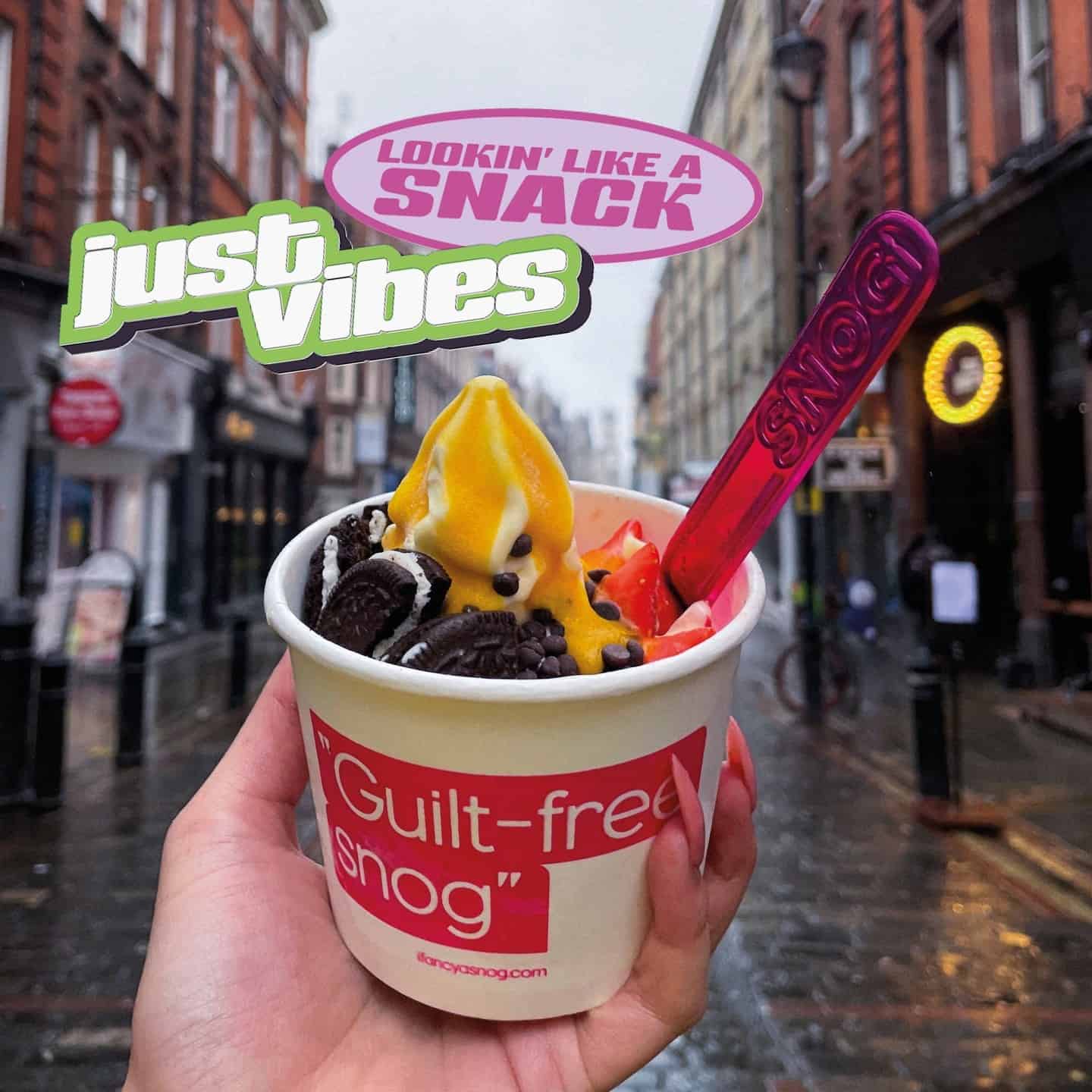 At their Southbank location, Snog’s frozen yoghurt comes to you in the form of a bright pink double-decker bus.

Order your chosen yoghurt from the bottom deck and then climb up top and take a seat on one of their tables for a prime people-watching spot.

You can soak up the views whilst you eat your yoghurt before it’s time to continue with the rest of your sightseeing around the city.

Snog’s yoghurt is freshly made and also fat-free, so you don’t have to feel guilty about tucking into a sweet treat.

You can pick from a variety of different toppings as a way to personalize your frozen yoghurt such as fruit, brownies, chocolate, or nuts.

It’s open seven days a week from 11 am to 11 pm, so perfect if you fancy a late-night snack or something to grab and go whilst you’re busy touring London during the day.

Other locations across the city include Chinatown and Shoreditch.

2. Pinkberry at The Angel 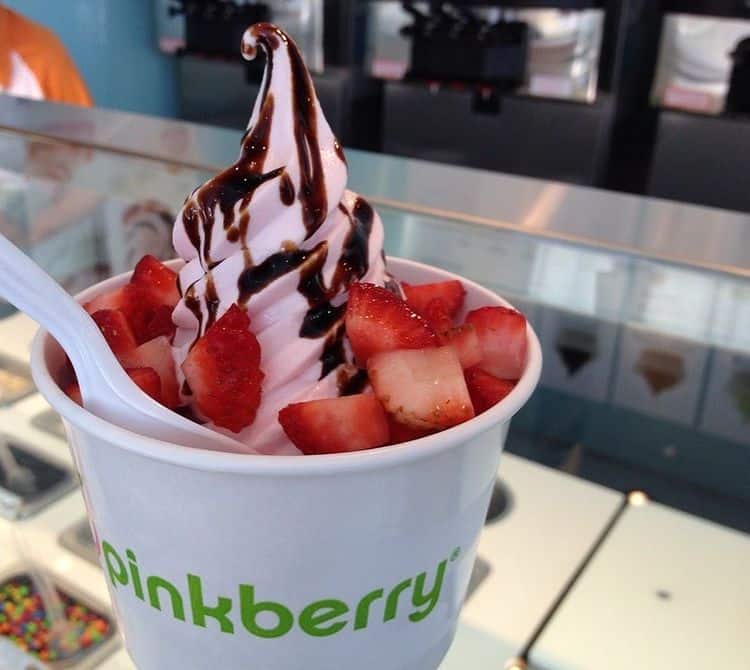 Pinkberry first appeared in Los Angeles in 2005, and with its ever-growing success, it has now become popular worldwide.

Pinkberry has dozens of frozen yoghurt flavors available on their menu and with flavors such as chocolate, pistachio, cherry, and passionfruit you’re going to struggle choosing just one!

Along with their multiple yoghurt flavors, they also have an extremely large choice of toppings available, pick from different sauces, fruits, biscuits, and cereals.

With all the options they have to offer, you can be sure to make the most unique frozen yoghurts.

Along with frozen yoghurt, Pinkberry also sells smoothies and bubble waffles, perfect if you’re after something a little different.

3. Yogland at Kensington and other locations 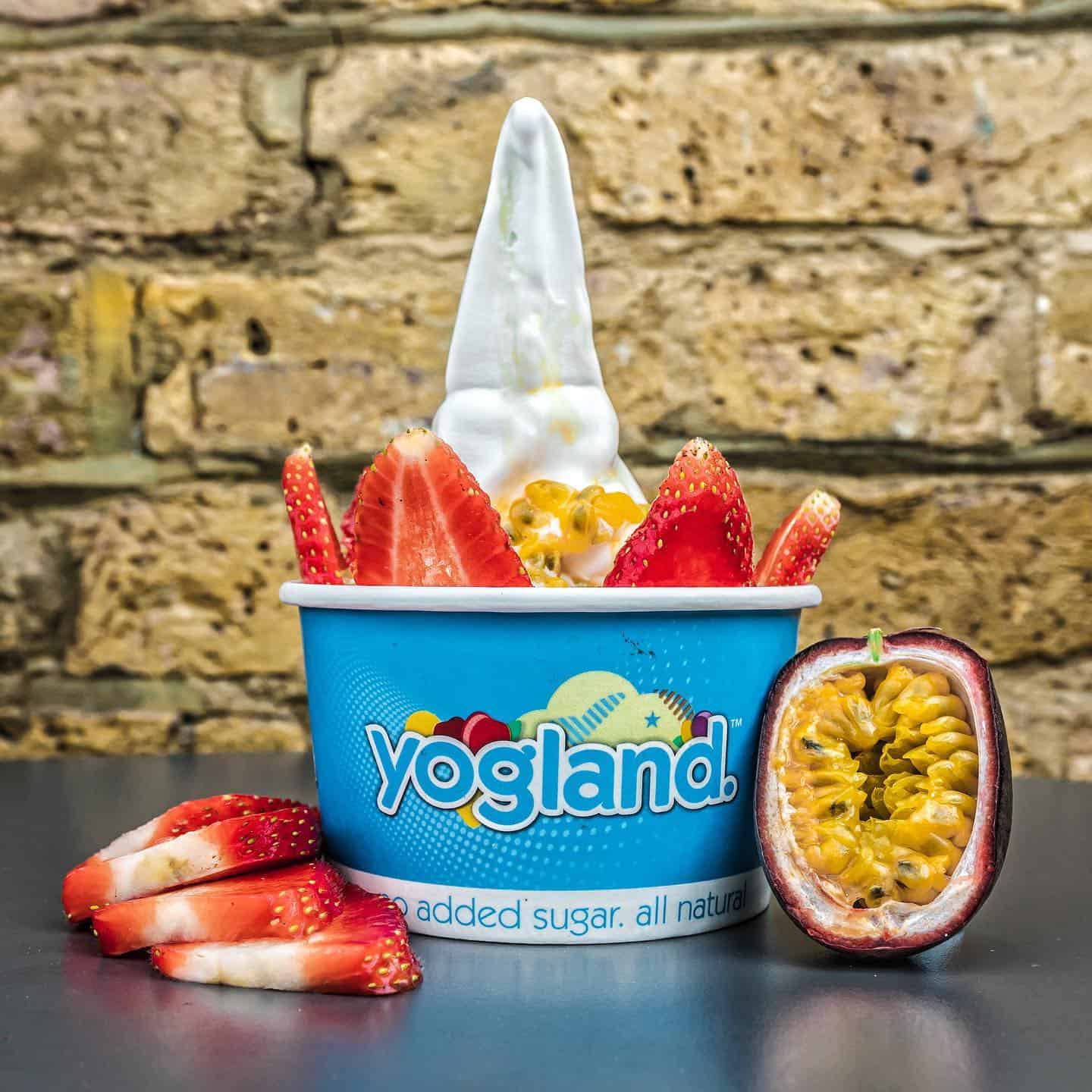 As a franchise, not only is there a Yogland located in Kensington, but also across multiple locations in London such as Kentish Town, Wandsworth, and Chiswick.

Yogland is all about creating healthy and fun snacks, so all of their yoghurts are plant-based, paleo, and gluten-free. Not only this, but they’re also high in protein, low in carbs, and have no added sugar.

Flavor options on the menu include natural yoghurt, watermelon, white chocolate, and pistachio, and that’s just to name a few!

They also have ice cream flavours and if you can’t decide between the two, why not go for a scoop of both?

You can also personalize your yoghurt with the usual toppings such as fruits, nuts, and different sauces.

The Kensington store is open seven days a week from 1 pm to 11 pm. 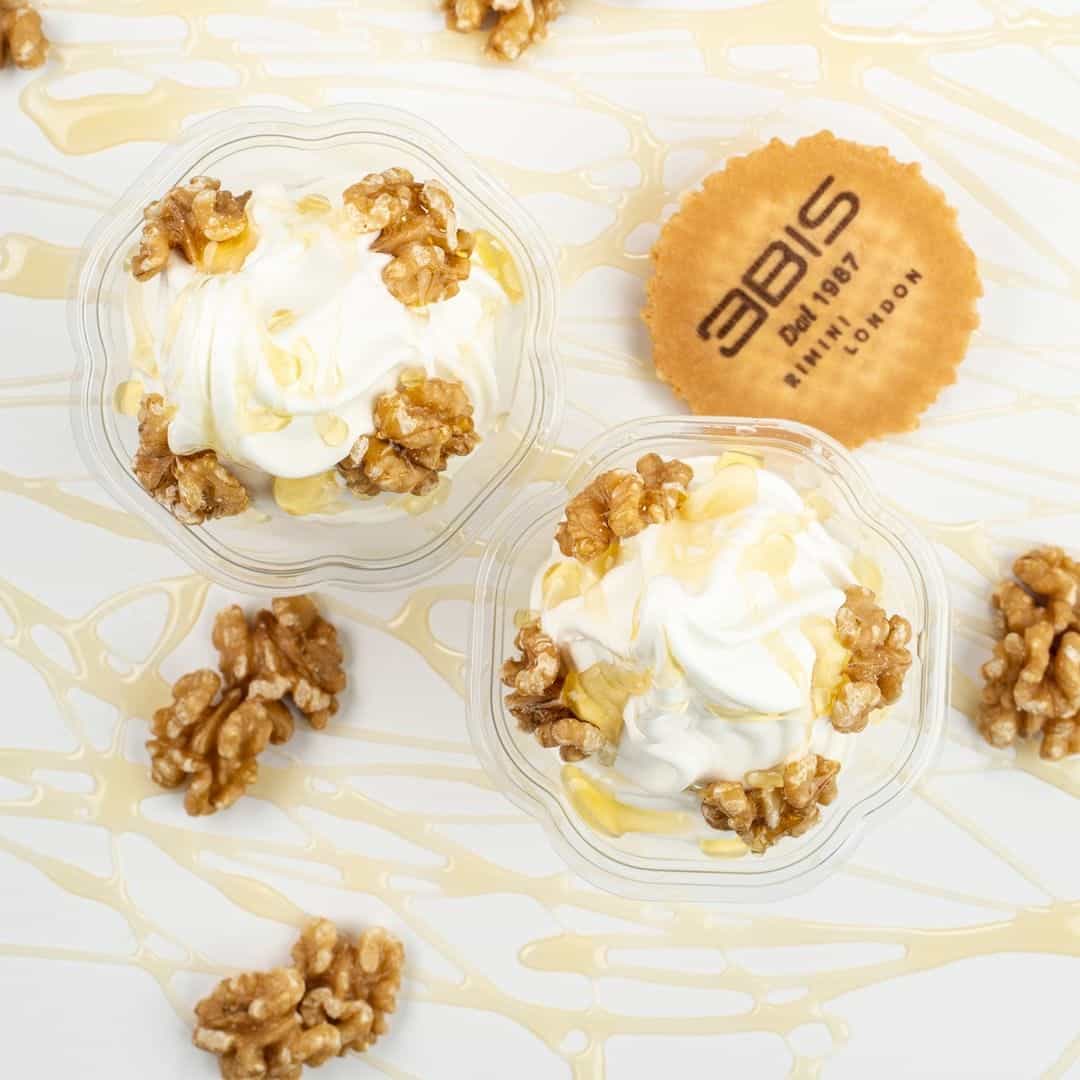 Gelataria 3bis is an Italian gelato franchise that has two locations in London, which are Borough Market and Portobello Road.

It opened its Borough Market store in 2012 and followed up with the opening of its Portobello Road store in 2017.

Traveling all the way from Italy, the stores aim to bring a slice of Italy to the streets of London, and with its success, Gelateria 3bis has now become a must-stop place for those visiting Borough Market.

As well to frozen yoghurt also have a variety of other sweet treats available such as gelato, crepes, and waffles.

Their frozen yoghurt is always prepared fresh in-store and you can choose from a wide selection of toppings, sprinkles, and fresh fruit to add some flavour to your yoghurt.

Gelateria 3bis is open seven days a week from 11 am to 9 pm and is also available on all takeaway apps such as Uber Eats, Just Eat, and Deliveroo, so you can even order their frozen yoghurt straight to your door. 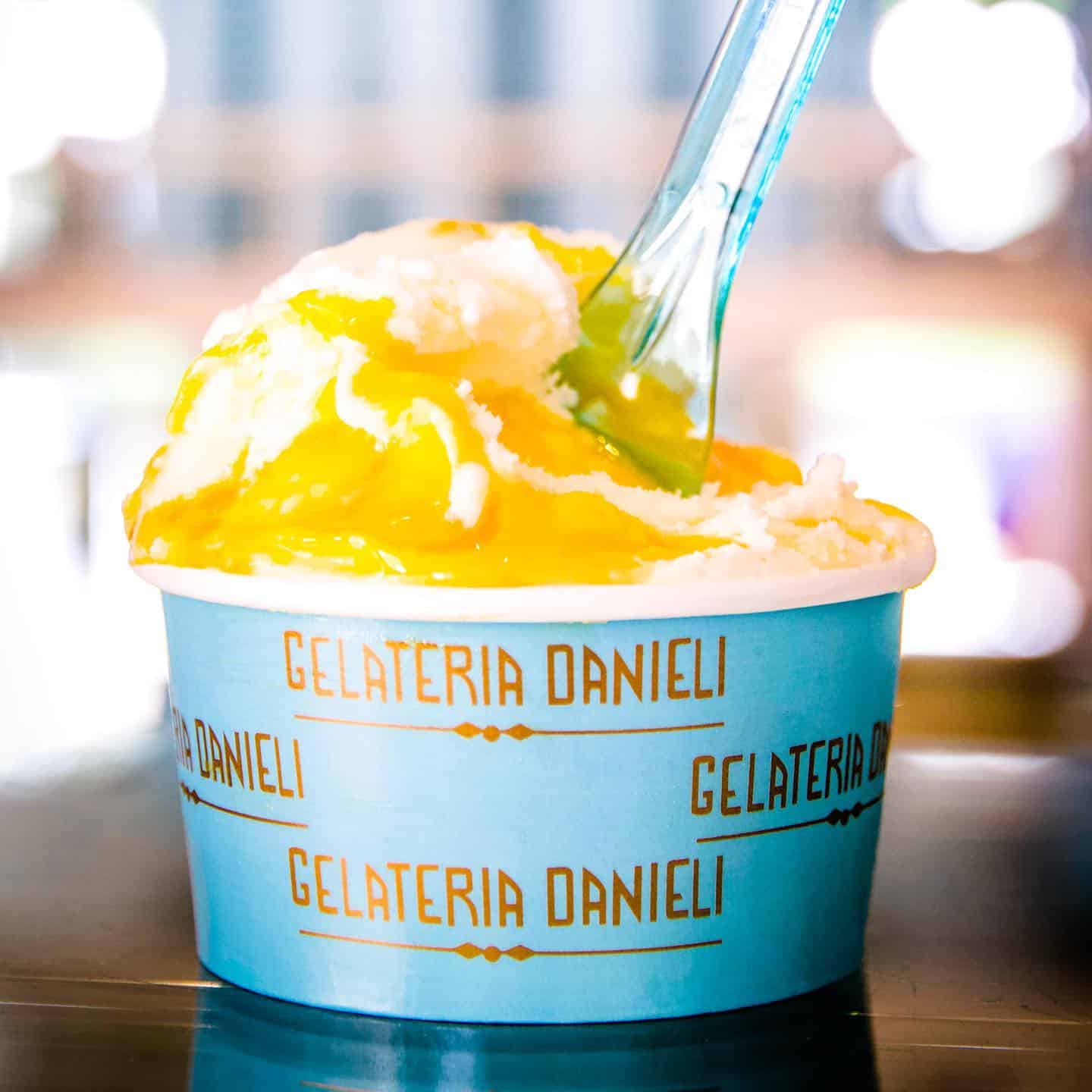 A little further out of the city center than the other frozen yoghurt stores listed, Gelateria Danieli is perfect if you’re after a quieter afternoon away from the hustle and bustle of London’s tourist hot spots.

Gelateria Danieli is located in Richmond, which is still accessible via the London Underground and other modes of public transport.

Not only does Gelateria Danieli serve frozen yoghurt, but also on the menu you’ll find gelato, chocolates, and Italian-style coffee.

With numerous frozen yoghurt options and twenty-four plus gelato flavors, you’ll be sure to find something to satisfy your sweet cravings.

If the weather is nice outside there is also the option to sit on one of their outside tables and watch the world go by as you eat your frozen Greek yoghurt or sip on your frothy cappuccino.

Gelateria Danieli is open seven days a week from 10 am to 6 pm and also has the option to take away if you would prefer your yoghurt on the go.

6. Yole at Covent Garden and other locations 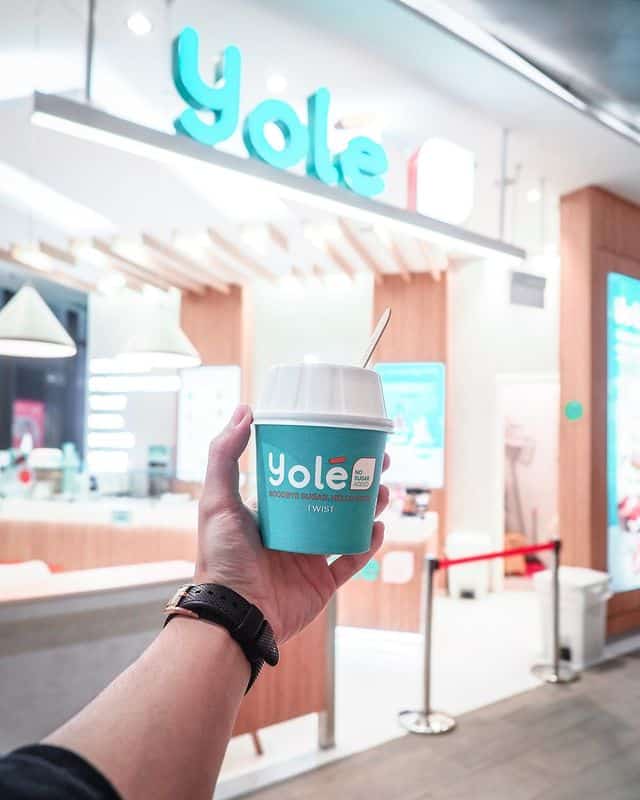 Yole is a frozen yoghurt and ice cream brand that focuses on making its desserts as healthy as possible for its customers.

When you purchase a pot of frozen yoghurt from Yole, you can expect no added sugar, low in calories, eco-friendly, and a great-tasting treat.

The brand offers a variety of different products, so whether you fancy frozen yoghurt, ice cream, bubble waffles, or shakes, they have you covered.

Depending on how hungry you are, you can opt for either medium or large when it comes to their frozen yoghurt. The medium pot lets you add three toppings, whilst the large lets you add five.

You can choose from all of your favorite toppings such as fruit like mango or strawberries, a variety of sauces, and cereals such as granola if you want more of a crunch.

There’s also the option for a bubble waffle, which is presented as a cone, and your choice of frozen yoghurt or ice cream served inside, again with all of your favorite toppings.

If you fancy something slightly different, then why not opt for a frozen yoghurt shake? Perfect if you’re on the go and want something to sip on whilst you’re catching the sights of London.

The shakes come in flavors such as strawberry, pineapple, and chocolate banana.

The Covent Garden store is open Sundays to Thursdays from 1 pm to 9 pm and at weekends from 11.30 am to 10 pm. You can also order Yole straight to your home or hotel with Deliveroo or Uber Eats. 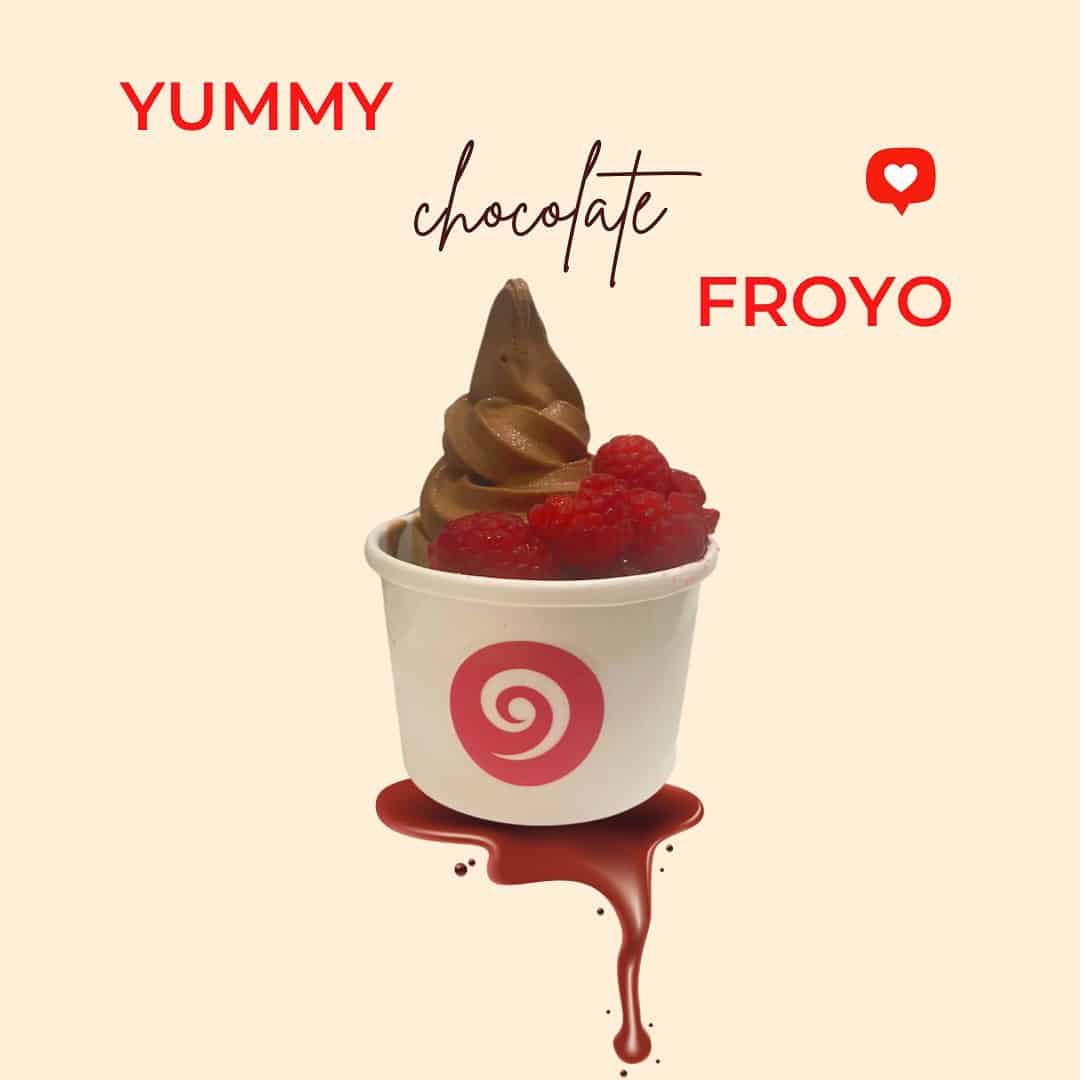 Yogopink is a contemporary frozen yoghurt store located in Mill Hill, Edgeware. A little further out of the city center, it’s the perfect excuse to escape the crowds of the city center when you fancy a bite to eat.

With the option to take away, as well as dine-in, you can choose to eat your frozen yoghurt out in the sunshine sat on their outside seating area, making it a great way to cool down on London’s hotter days.

As soon as you walk into Yogopink you’ll be greeted by an airy store with bright pink décor, giving it a sleek and modern vibe. Even though the store is small, Yogopink still has a variety of frozen yoghurt flavors available.

If you fancy something different, they also have a choice of smoothies and coffees available.

Yogopink is open seven days a week from 12 pm to 10 pm, and even though it is still a little way out from the city center it is still easy to get to via the London Underground, bus, or taxi.

8. Amorino at Notting Hill and other locations 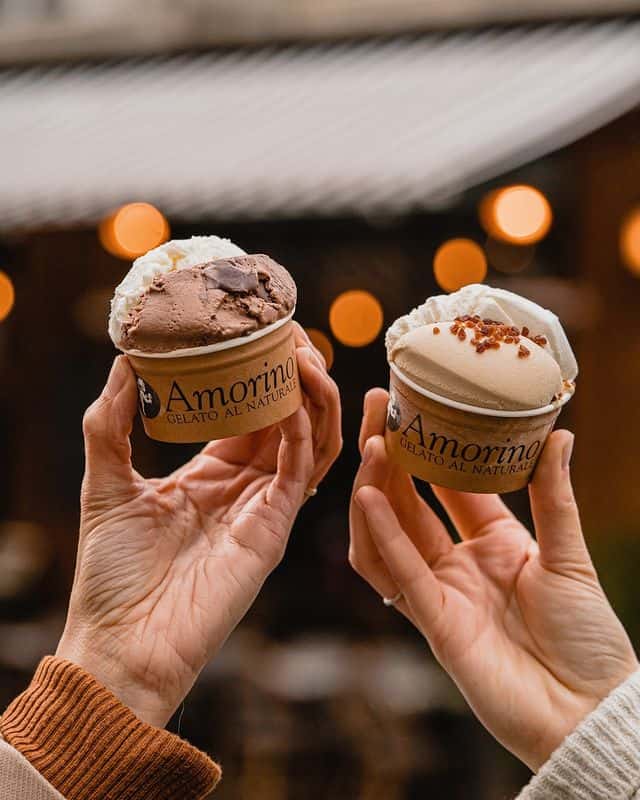 Amorino has been providing its customers with frozen yoghurt and gelato for over fifteen years.

It prides itself on creating yoghurts without any artificial colors, flavors, or enhancers and has been using organic foods in all of its recipes.

They now even offer the option of vegan and gluten-free, wanting to create a product for all their customers.

Over the years, Amorino has had multiple shops pop up across London, meaning you can be sure to find a store somewhere on your travels when exploring the city center.

As well to Notting Hill, you can also find Amorino in Camden, Convent Garden, and China Town, and that’s just to name a few.

Amorino has made sure to make their frozen yoghurt options perfect for their customers who would like a lighter option.

All of their frozen yoghurts are as light as sorbet, coming in at only 115kcal per tub, and it’s also fat-free. Customers can choose to add fruit options to their yoghurts such as strawberries, raspberries, lemons, or oranges.

Unlike other frozen yoghurt shops, Amorino has a large indoor seating area with multiple table options to choose from, perfect for if you fancy a long catch-up with friends or a break in your busy sightseeing schedule.

Also, on offer at Amorino, you’ll find gelato, coffee, and macaroons to tuck into.

Notting Hill’s Amorino is open seven days a week Mondays to Fridays from 12 pm to 11 pm and Saturdays and Sundays from 11 am to 11 pm.

With the warmer months approaching and London starting to heat up, frozen yoghurt is the perfect option to cool down with, especially whilst you’re out and about touring the capital city.

No matter where you are in London, with frozen yoghurt becoming more and more popular you’ll be sure to find somewhere that serves the tasty sweet treat.

Whether you’re exploring further afield in Richmond, where you have Gelateria Danieli, or in the heart of London with options such as Snog and Pinkberry, there are so many places to choose from to give in to your sweet cravings.

Not only are there a wide variety of frozen yoghurt shops to choose from in London, but most gelaterias also offer healthier yoghurt options such as fat-free choices with no added sugars or preservatives, and with topping choices of fresh fruits and cereals, you don’t have to worry if you’ve been putting in all of that hard work at the gym. 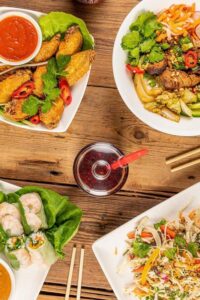 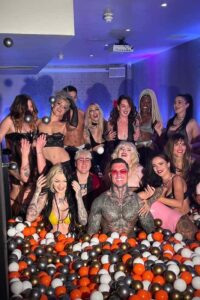 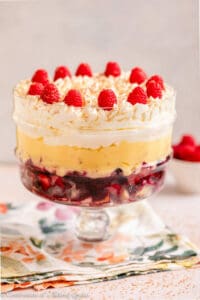